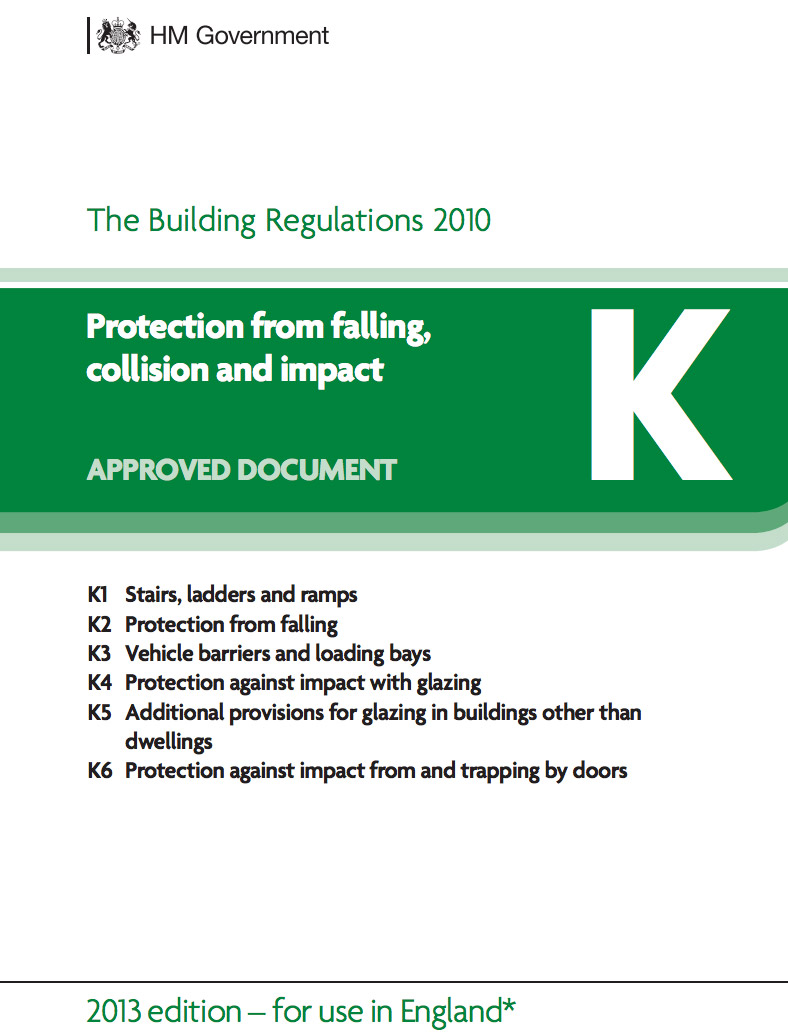 A domestic staircase is defined as “A stair intended to be used for one dwelling” i.e. a stair case that is used within a house or flat.

Download:
Section K can be downloaded by clicking here

Please note the below information is only applicable for England, Wales and Northern Island, Scotland has separate building regulations.

This is also our interpretation based on the most commonly asked questions, to be absolutely sure we would recommend checking with your building inspector

The following rules must be met:

Note that the ind. going doesn’t include the nosing overhang.

Because of the pitch being restricted to 42°, the minimum individual going depends on the individual rise.

The table to the right shows the minimum ind. going based on the ind rise for a 42 degree pitch.

The individual rise is the total rise divided by number of risers.

A staircase has a 2600mm total floor height,

As such, we would normally use 12 risers on this staircase, because that’s the minimum number of risers, which will in turn result in the lowest amount of floor space being taken up by the staircase.

However, with a individual rise of 217mm, if we used the minimum individual going which would be 220mm, the pitch would be 44.6°, which is too steep for the maximum 42° pitch.

All risers must be equal on a flight of stairs, for example, you cannot have some risers at 200mm and some at 205mm.
However, on a staircase with a landing, each flight may have a different individual rises.

Twice the individual rise plus the going (2R +G) must be between 550mm and 700mm, however, this only causes a problem in extreme scenarios. 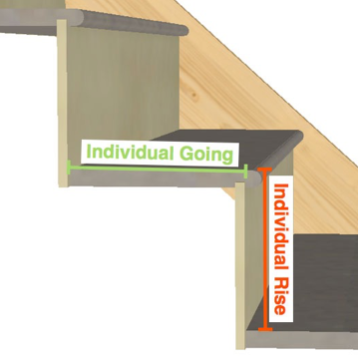 Kite winders are a useful tool to minimise the space taken up by a staircase with a turn,
There are certain rules that must be adhered to when using kite winders,

A stair with kite winders will normally have a mixture of straight treads and winder treads, as shown in the digram below: 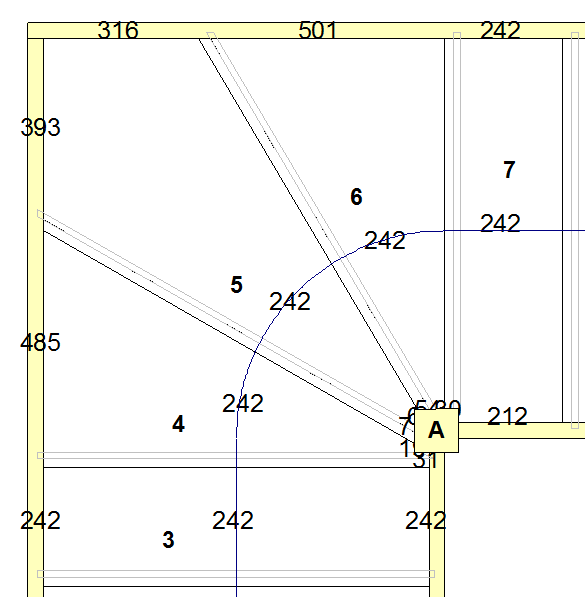 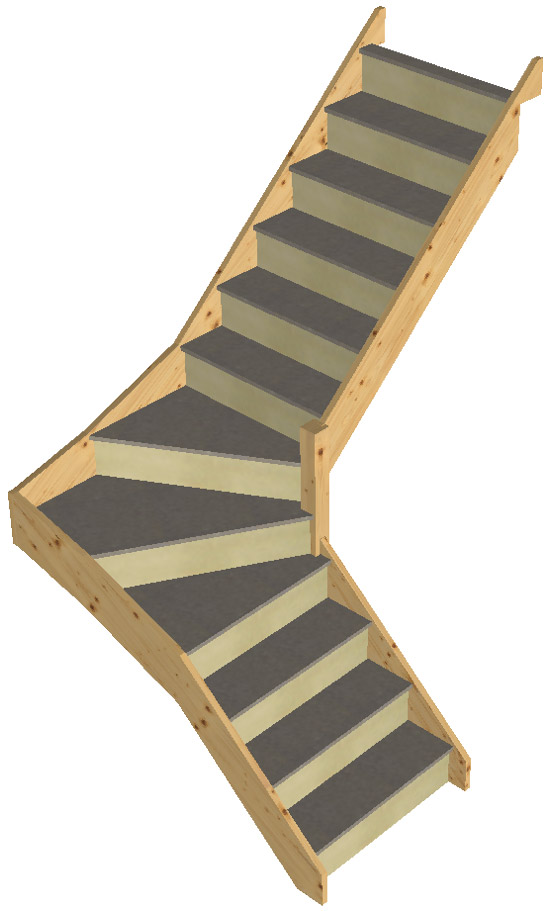 To measure the individual going of the winder treads, this is done by measuring the arc around the tread which is created from the centre of the lower flight to the centre of the upper flight, this is the blue line as shown on the diagram above.

Each winder individual going must meet the following criteria; 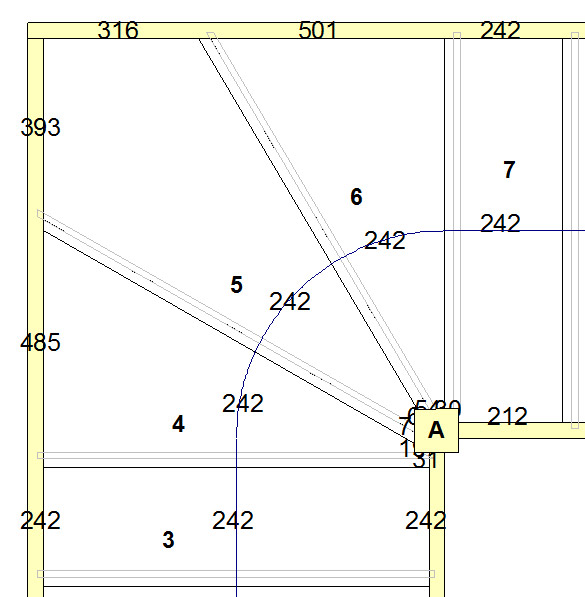 In the example to the left, the straight treads are all 242mm,
as such, we have designed the kite winder to also have treads of 242mm measured around the arc.

If they were less than 242mm then they would not comply to building regulations, however it is okay for the individual going of the winder treads to be more than 242mm as long as they are all equal. 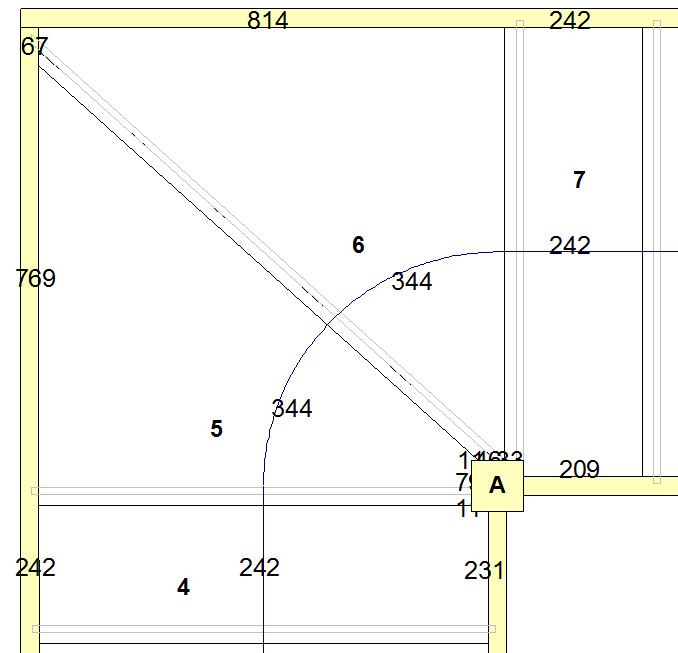 The rule for all treads says that, “Twice the individual rise plus the going (2R +G) must be between 550mm and 700mm” as outlined in section 1 above.

The winder treads are both equal and greater than the straight treads so they meet building regulations, however, they’re very large, if we apply the following rule; 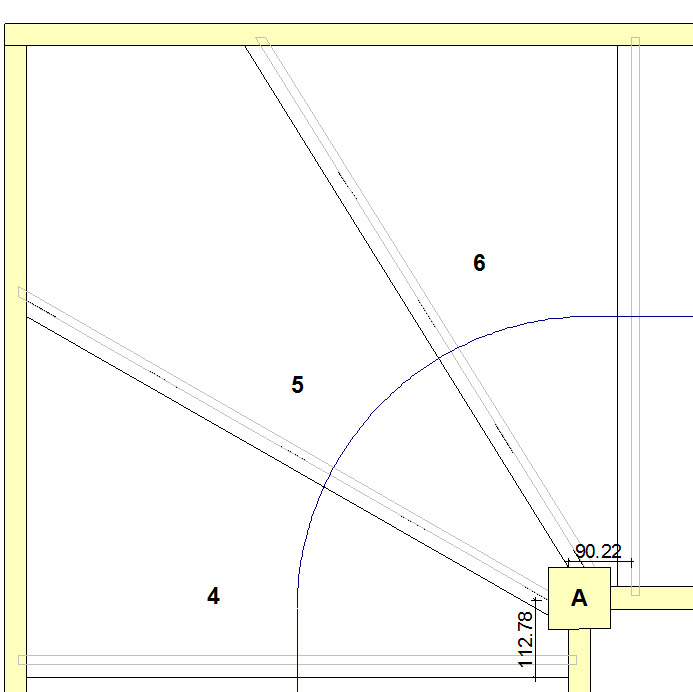 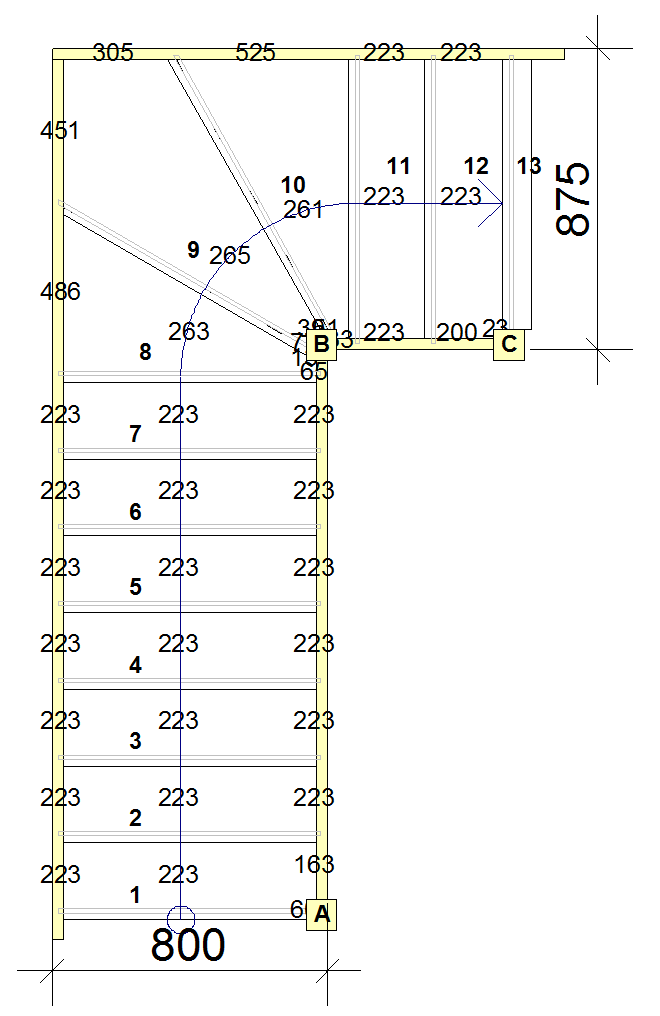 There is no minimum width stipulated for a domestic staircase within part K of the building regulations.

However, it is generally accepted that on a main staircase, going up to the first floor serving multiple rooms should be no less than 800mm, however, we would recommend 850mm to 950mm as this allows more space to get things up the stairs.

For loft conversions, the generally accepted minimum width is 600mm, however between 700mm and 750mm is recommended.

On staircases with a turn, it’s acceptable to have each flight a different width, like on the example to the right.

For a staircase with a kite winder, if the stairs are more than 1000mm wide then please contact us.

Headroom at all points going up a staircase: 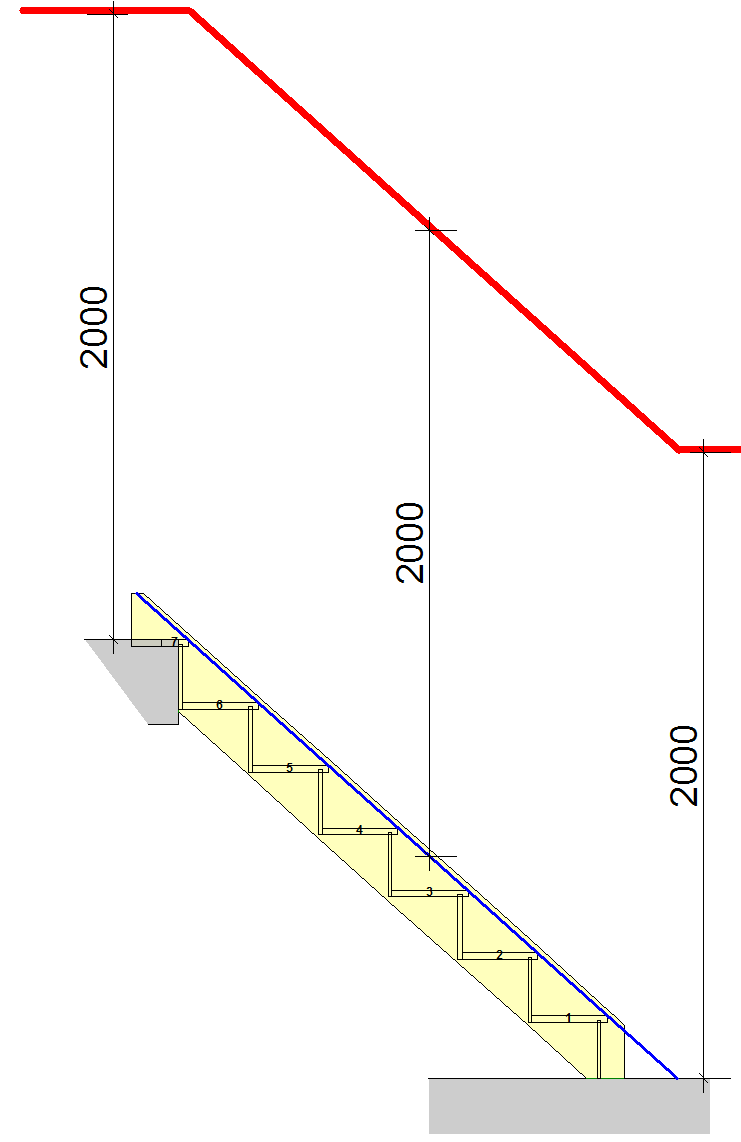 Headroom is one of the most common problems with staircases, the building regulations state that you must have two meters headroom at all points when walking up the staircase from the pitch line.

The pitch line is a line that is drawn across the front of all of the treads, as indicated by the blue line in the diagram to the left.

Note; Where there are real difficulties with headroom when converting existing spaces such as lofts, some building control officers may be lenient, but it is always best to check before installing your staircase.

We’re also able to offer drawings for your staircase and calculate headroom for you before you order it to avoid problems after they’re installed. 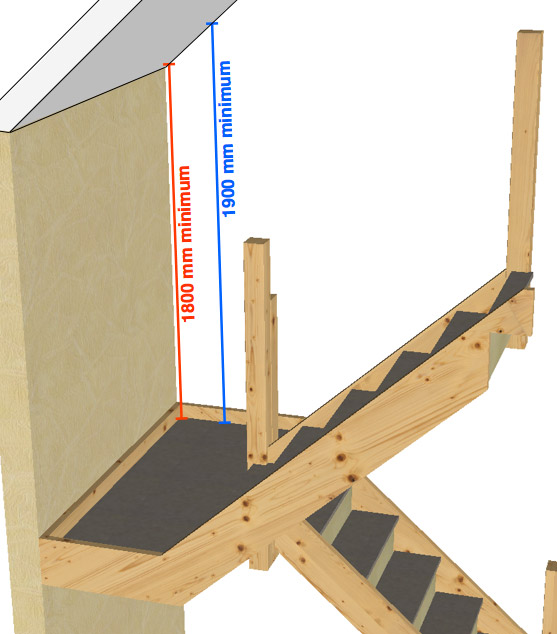 However, this is only applicable for loft conversions.

A landing can either be:
Where the staircase changes direction, a flat platform.
Part of the floor, the area at the bottom or top of the stairs.

The building regulations state that, the width and length of a landing which constitutes part of the floor area must be at least equal to the smallest width of the narrowest flight of the staircase.

So, in the example above, because the width of the staircase is 750mm, the space at the top and bottom of the stairs must be a minimum of 750mm as well.

The building regulations that apply to domestic stairs state that, the position of the top of the handrail should be between 900mm and 1000mm from the pitch line or floor. 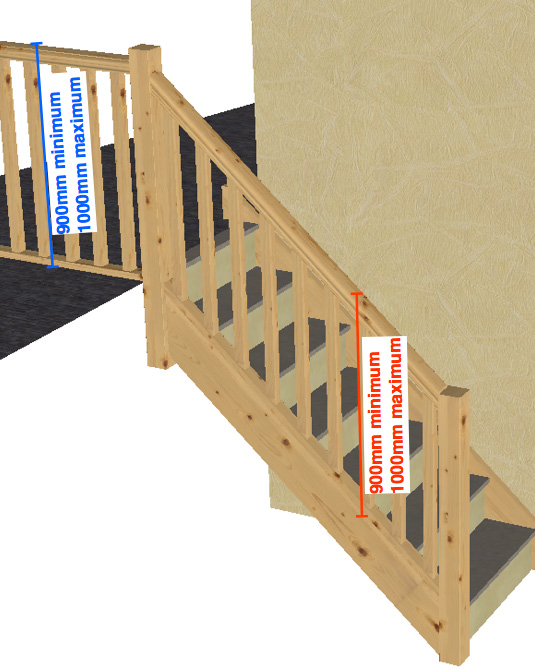 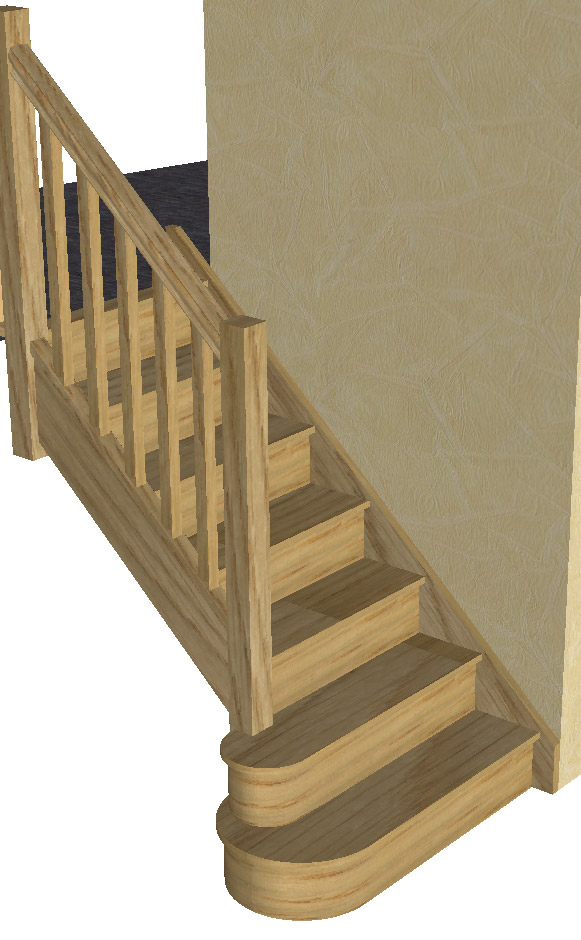 The building regulations state that, handrail must be provided at the sides of flights where there is a drop of more than 600mm.

This means that, on most staircases, the maximum number of steps you can have without a handrail is two, an example of this would be as shown to the left.

From this point on, handrail must be provided on any part of the staircase which is open to prevent people from falling.

The building regulations state that, a 100mm sphere should not be able to pass through any opening in the balustrade, as such, the maximum gap between the spindles should not be any greater than 99mm, as shown on the diagram to the right.

The building regulations forbid the use of what are commonly referred to as ranch rails, this was a popular style of balustrade and is often favored due to being cheap and easy to install, although they’re not directly forbidden, the building regulations state that in a building where children under five years of age have access, then guarding that can be climbed must not be used, an example of this is shown below; 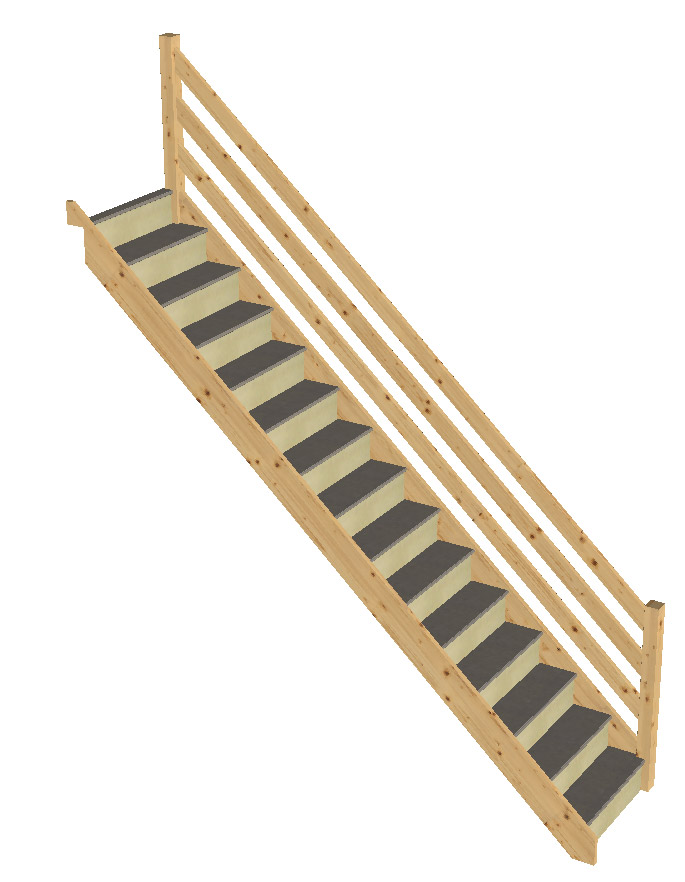 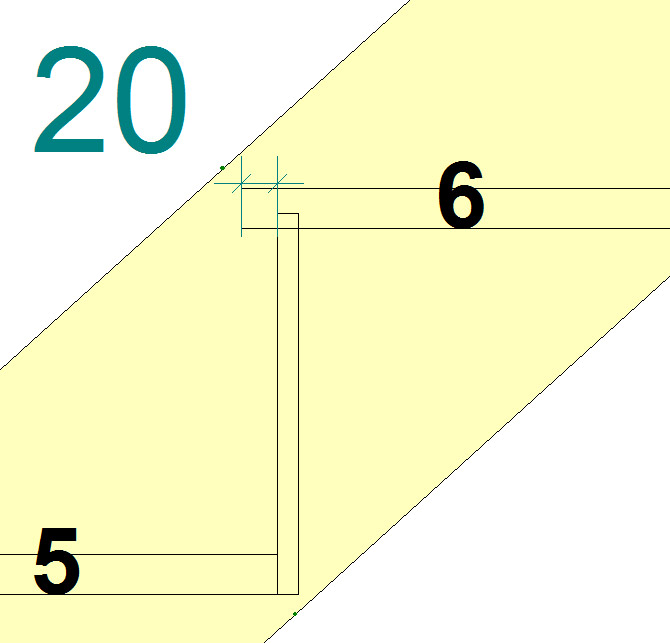 Nosing is the area of the tread that overhangs the riser, as shown in the diagram to the right.

On a domestic staircase with closed risers, there is no minimum or maximum overlap for the nosing overhang, however we would recommend 20mm.

Doors:
The building regulations stipulate that there must be 400mm from the door, or swing of the door to the bottom of the stairs.
The diagrams below illustrate this. 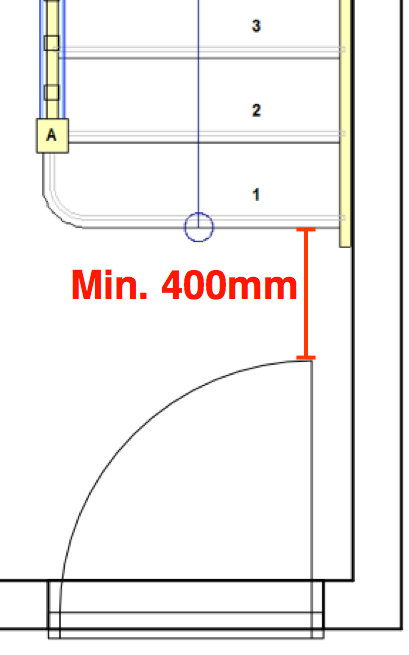 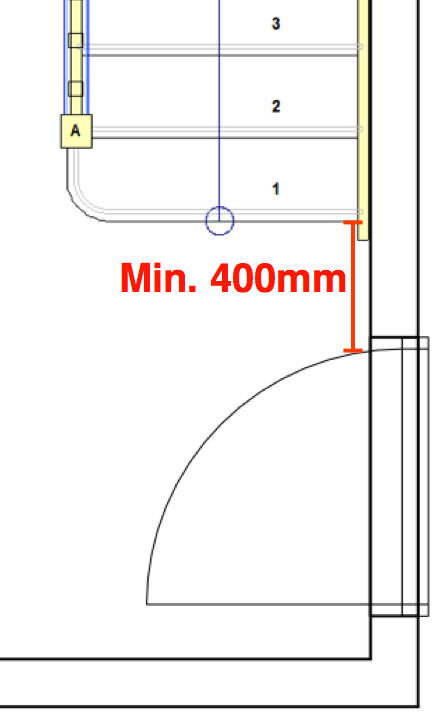 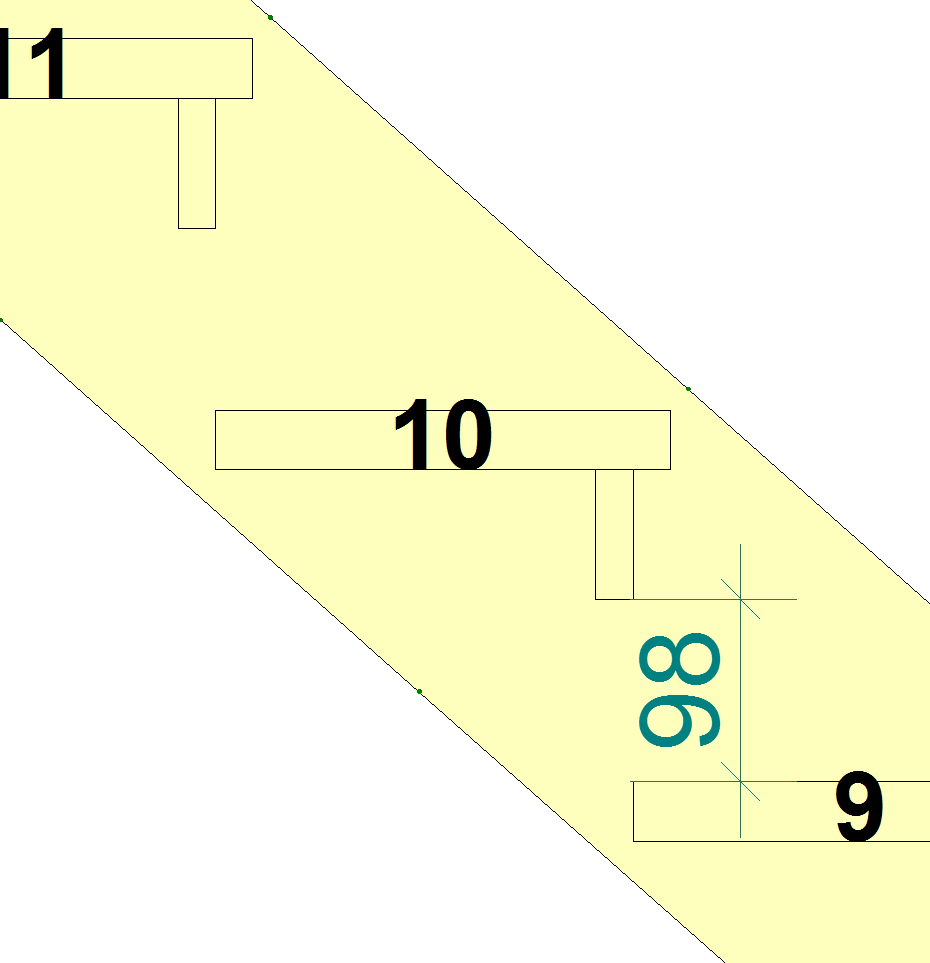 The building regulations stipulate that a 100mm sphere should not be able to fit through the staircase at any point.
This means that, generally open riser staircases cannot have fully open risers. The solution to this is to either use a partial riser in timber, or a chrome riser bar to ensure that there is no more than 100mm gap anywhere. The diagram to the right shows an example of a mini open riser staircase.

Also, on an open riser straight the treads must overhang by at least 16mm

Below are example of a mini open riser stair and a stair with metal bars that conform to building regulations. 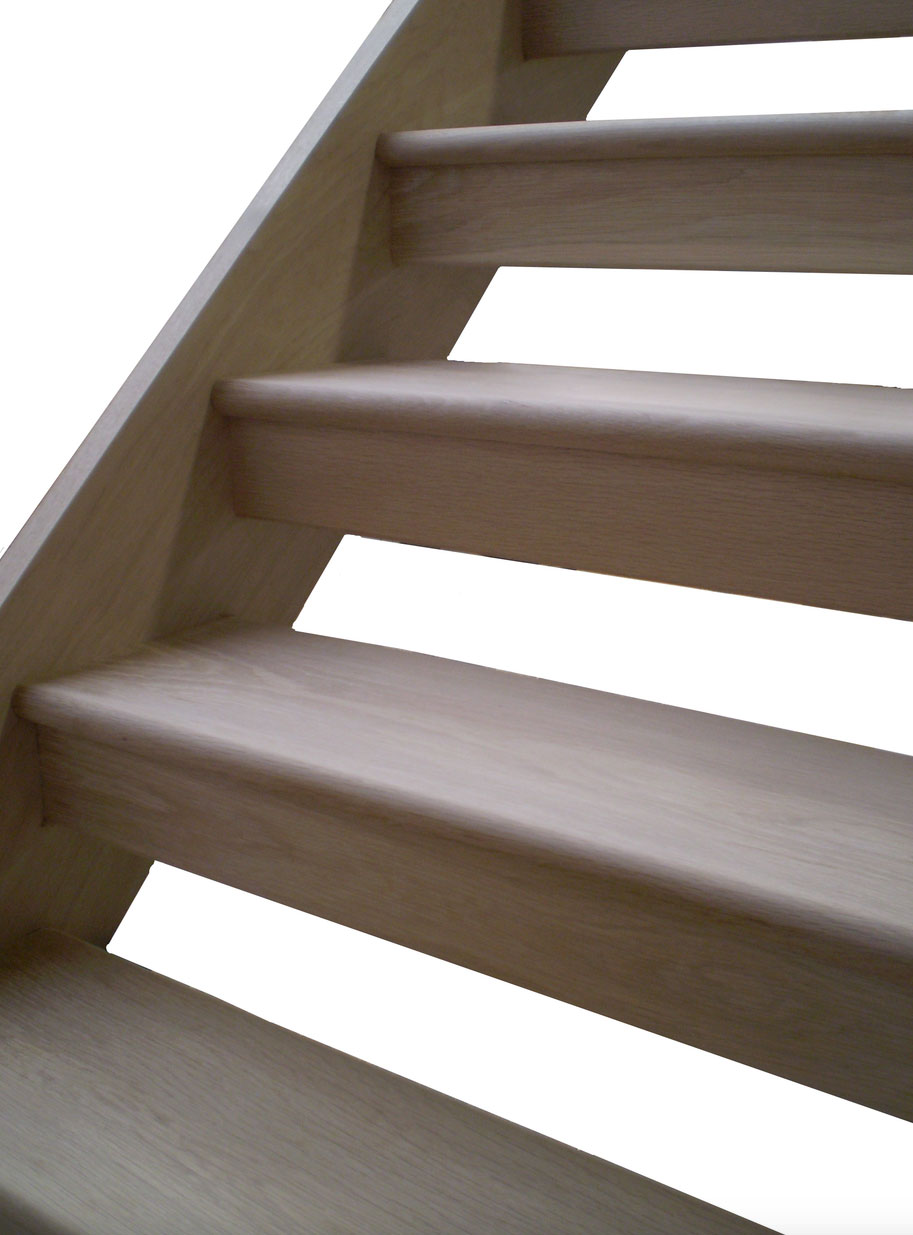 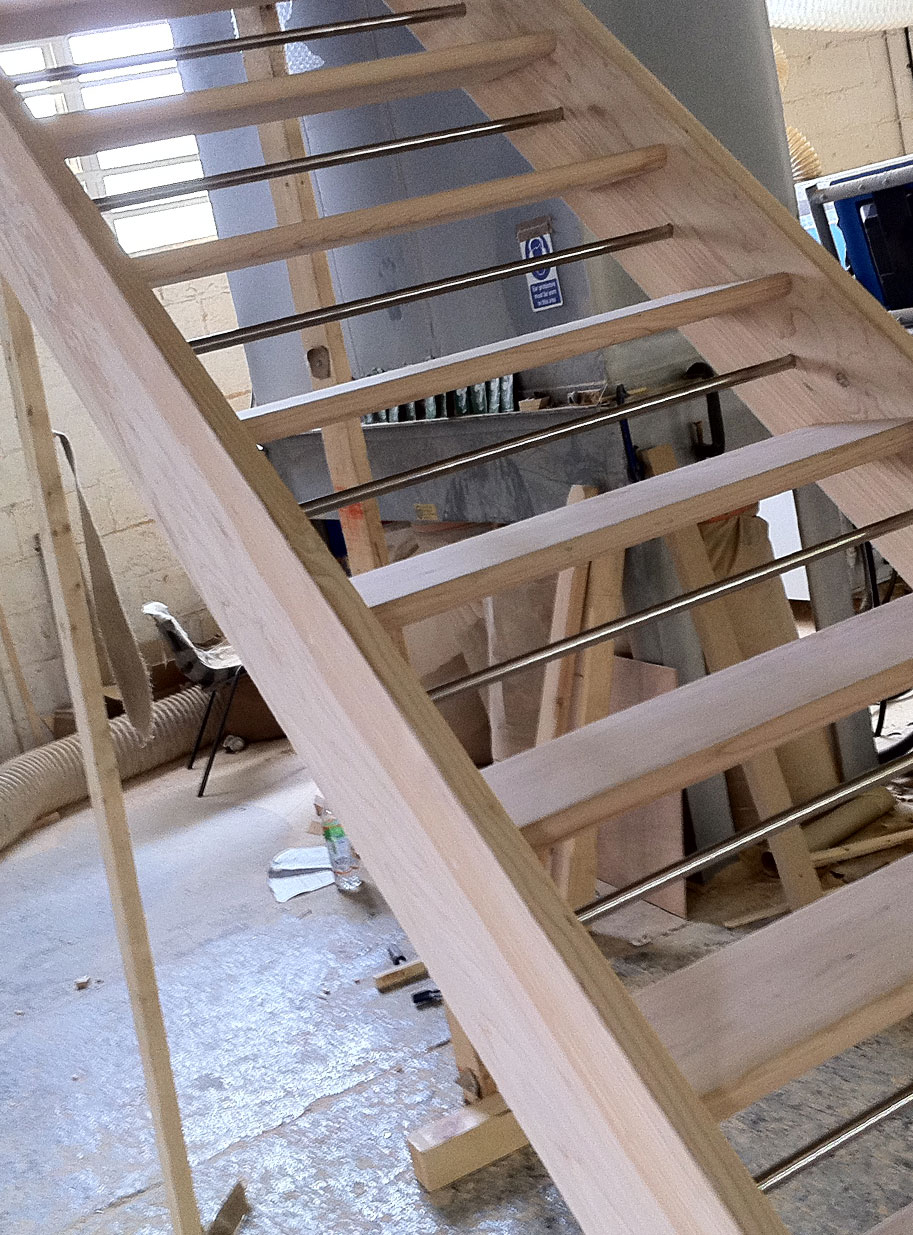 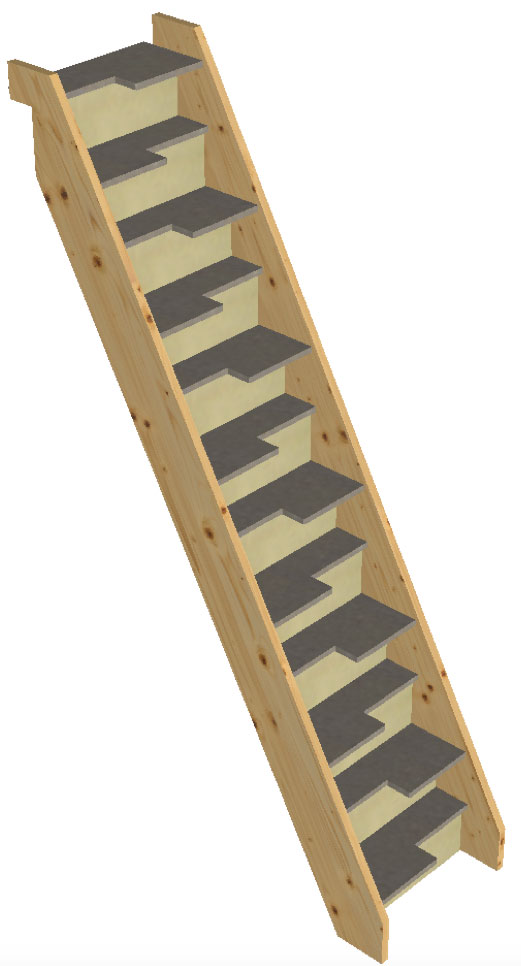 In a situation where it’s not possible to fit a standard stair in, it is possible to use a space saver staircase.
These are also known as ‘loft stairs’ or ‘alternating tread stair’.

However, the building regulations state that these may only be used if serving a single room, for example, a loft conversion with a single bedroom.

It’s worth noting that most building inspectors do not like them and you should only use them as a last resort.

The building regulations state that space savers need to have a rise of no more than 220mm and a going of no less than 220mm on the long side of the tread the 42° pitch rule does not apply because of this.

It’s also worth noting that, on a space saver stair handrail or wall handrail must be installed both sides of the staircase.

Not Sure What you need?

If you're not sure what you require, please feel free to call us on 01482 426388 and we will be assist you in calculating what you need or fill form below

Design & build yourstaircase online and get it delivered to your door!